I have come to the conclusion that I will no longer post on this blog.
I do not have the time( I haven't posted since December 2013),
nor any new material (I'm out of topics y'all!) to post.

However, I will keep this blog "active" and continue to allow comments, because it documents my journey from the very beginning of my transition, to the two years later when I chopped my relaxer off, to a couple months into my 100% natural phase. I will check back and reply to comments when I see them. My hope is that my previous posts can help someone along their way on their own transitioning.natural hair journey. This does not necessarily mean I will stop making videos. But as for this blog, I will keep it to a transitioning blog, and you will see no more posts here from this point forward.

To those of you who have always checked back for updates and read every single one of my posts: THANK YOU for sticking with me!
It has been one amazing ride!

Everything I Believed About Cheap Combs Was a Lie

Ok, so the title to this post is a bit dramatic. Haha. But, I've always been kind of a comb snob. I've been through countless combs and comb brushes that have flimsy bristles and that generally don't do anything for my hair. Because of this, I adopted the mentality that a cheap Target/Wal-Mart comb would not get the job done and I had to get combs at a higher cost from specialty stores.

I know Christmas is now around the corner, but I hope everyone had a happy Thanksgiving! 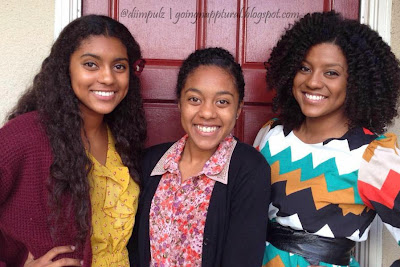 Happy Thanksgiving again, and I hope yours was as delicious as mine!
Posted by diimpulz at 8:42 PM 1 comment:

PSA: Do Not Buy From Queen Style Hairs Co.

It was brought to my attention that this company, Queen Style Hairs Co., (which sells wigs,) was using my photo on their website claiming I was wearing a Brazilian remy Lace Front from their store.  I never gave Queen Style Hairs Co. permission to use my photo in any way, shape, or form and especially not for advertising purposes and monetary gain! This made me upset. Not only because they were infringing on my portrait rights, but also because they were clearly lying to consumers! After looking through their other products, it became increasingly clear to me that this company does not use many (if any) authentic photos of their own products, but uses photos of celebrities an normal girls claiming they are wearing this product. Girls will log on to their website and see these images thinking that they are ordering a wig that looks like the one in the photo, when it is NOT! Keep in mind all of these wigs sell for triple digits in American money, and some of them are listed for upwards of $380!  This is completely unethical. 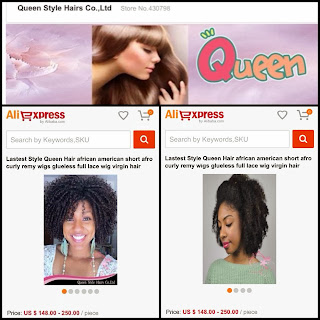 I sent the online store owner a private message asking her to remove any and all images of me from anywhere they were used on her site. I also filed a complaint with the host website (alibaba.com) to inform them that one of their vendors was using my images without consent and falsely advertising their product. Alibaba responded to my complaint in a timely fashion and assured me they would remove the content if no counter complaint was filed and no action was taken on the part of Queen Style Hairs Co. However, when I went back to the link where my image was featured, I found that my photo had already been removed, and replaced with a photo of Mae AKA "Natural Chica." I'm 99% sure this photo of Mae is also being used without her permission and this STILL indicates false advertisement of their own product. Sickening.

All this is to say that this company, Queen Style Hairs Co., is completely fraudulent, and I'm sure there are other sites like this out there. "Buyer Beware" whenever ordering online! Do your research! And steer clear of this company!
Posted by diimpulz at 6:38 PM 1 comment:

Hi all!
So, I tried another color of cream eye shadow to give myself highlights!
I used Maybelline's Color Tattoo by EyeStudio in "Bold Gold."

All I did was scoop some of the eye shadow out of the container,
rub it between my fingers, and pull it through select strands of hair.
I ended up with this pretty caramel color. 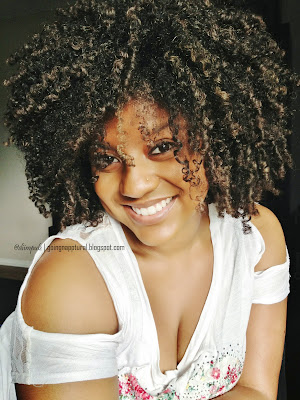 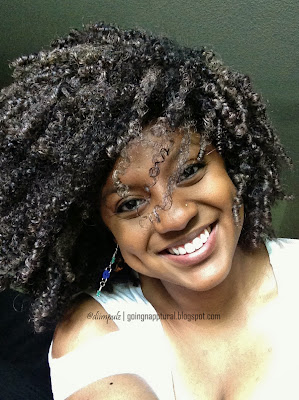 I dig it!
I like the blonde and the plum equally.
Can't wait to try more colors using this safe, chemical-free method!

Hi all!
Remember my Halloween Hair?
Well, I took those faux locs out three days after I put them in, and ended up with this: 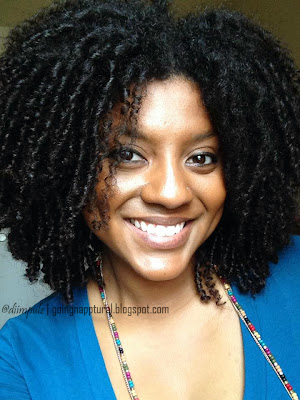 Love it!
I haven't worn my hair in a straw set in a really, really long time because I'm all about wash-n-gos now.
I still use this same old method to achieve this style! I love how it came out!

Posted by diimpulz at 1:09 AM No comments:

Hi all!
I know it's a whole new month now, but still, here is an update on how I wore my hair for Halloween. This year, my boyfriend and I decided to return to a themed couples costume. Our mutual love of The Walking Dead tv show prompted us to go as two of its characters: Rick Grimes and Michonne. Two very awesome, very badass individuals.
As you can see, Michonne wears locs, which I obviously don't have, but are very essential to portraying her character in costume. I had previously purchased a wig of locs when I was Lil' Jon for Halloween in high school one year, but I had left it at my mom's house and there was no way I'd be able to get it in time for this year's events. So what's a girl to do?

I created faux locs! How, you ask?
I gave myself a straw set! Then I simply removed the straws and left the curls chunked instead of separating them like I normally would. This was the result once I slapped a headscarf on it:

Side-by-side with the TV character:

And here is my full ensemble: 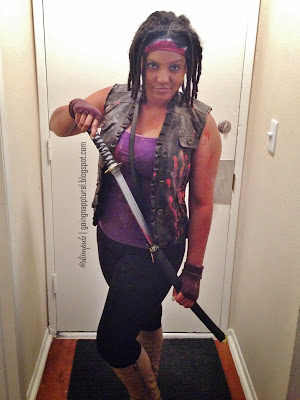 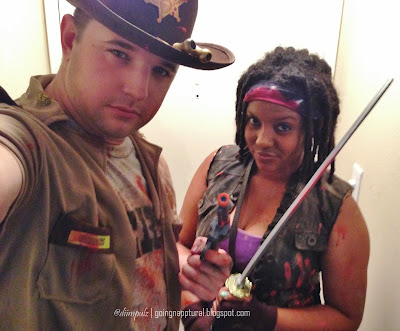 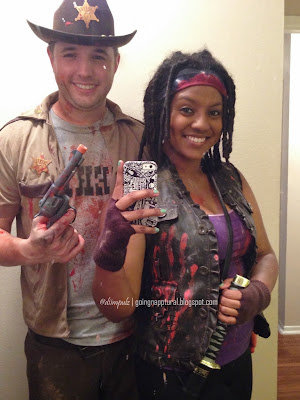 We took our costumes to Zombie Walk Long Beach which is a really fun annual Halloween music & art festival where everyone attends dressed in their Halloween costumes - particularly as zombies! Our costumes definitely were recognized among all those zombie enthusiasts. We had multiple people and groups of people stop us to ask for pictures! Overall fun! Thanks hair, for adding the finishing touch! =)